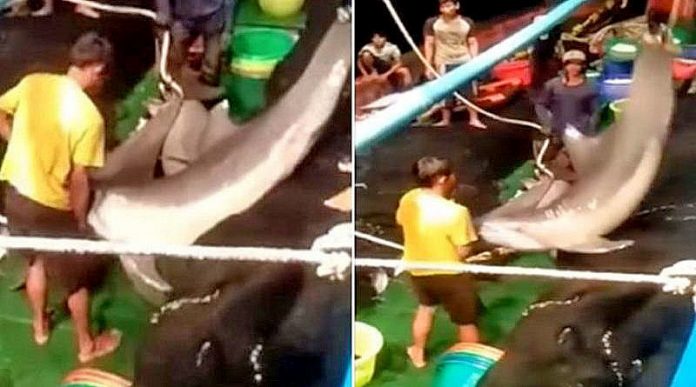 Royal Thai Police have responded to a video clip showing 30 dolphins caught in a fishing trawl in Malaysian waters, killing many of the mammals in the process.

The clip was forwarded to them by the Command Centre for Illegal Fishing (CCCIF).

The Thai PM ordered an immediate investigation which lead to the discovery that the boat in the video used to be named “S.Pornthepnawee 9”, a Thai boat that was sold to a Malaysian buyer 2 years ago. The boat had been moved to Malaysian waters and had its name changed to “KNF 7779”. Although not a Thai registered vessel anymore, there were 2 Thai fishermen, aged 56 and 49, on the boat at the time that the video was recorded.

The two Thais were working as a head fisherman and head fisherman’s assistant. Both men now have warrants issued in their name over the incident, according to the Royal Ordinance on Fisheries B.E. 2558 Section 66 that prohibits the fishing of marine mammals or endangered marine animals. They could be fined between 300,000 and 3,000,000 million baht.

The two men have admitted working on the boat and that they were responsible for giving orders to hoist all 30 dolphins onto the boat. They told investigators that, after the dolphins were on deck, 4 were made into “dolphin jerky” and the rest were thrown back into the sea.

It is unclear how many were dead when they were thrown back. If the men are unable to pay the fines they could be imprisoned for up to 2 years.